I haven't done a blog for ages; mainly due to a lack of time during the busy season last year and this year hadn't really got going...

It's been a very frustrating spring so far with almost constant wet and windy weather which has prevented us from getting out and about.  In my Lowestoft garden there have been few surprises and most of the species on our 2020 list have been from early stages and a couple of brief trips to Worlingham and Frostenden Woods. That said,  we have seen some a few lovely moths on those occasions. These Small Brindled Beauty were a nice surprise at Frostenden on a night we went to Dunwich but had to turn back because of a fallen tree blocking our way to the trap site.


We also had a good trip to Worlingham earlier in the winter where overwintering moths stole the show including this fantastic Buttoned Snout:


Other highlights of our winter sessions are as follows:

So, our species list by the end of February stood at nearly 50 species which is pretty good considering the relentlessly poor conditions.  We really needed some good weather for a proper session in the woods.  Luckily the weather for Saturday 7th March. Although breezy,  the forecast was for mild temperatures and no rain so we were Dunwich bound at last!

After setting up at our usual spot I took the opportunity to look for early stages and turned up a new species almost immediately; Stigmella suberivora on Holm Oak 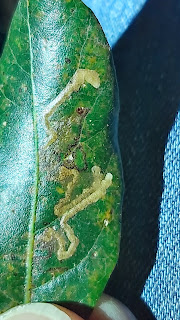 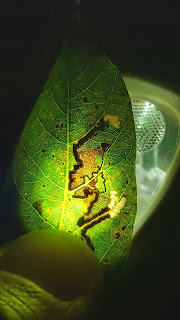 Moths weren't quick to arrive but first in was one of the target species,  Hellow Horned. The night produced over 60 of these lovely moths. 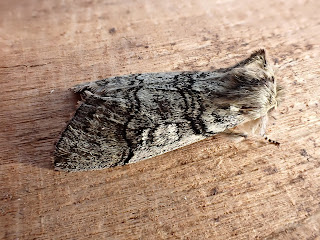 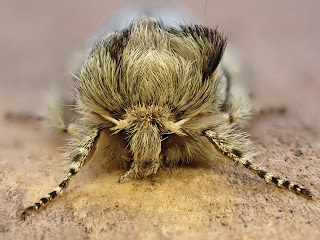 There were a few moths flying but it was a slow start in blustery conditions. As I followed one unidentified moth in an unsuccessful attempt to net it, I spotted something on the floor.  Amazingly it was a Brown Long-eared Bat! Clearly stunned,  we ushered it up a nearby tree to recover. It seemed fine so we carried on moth-ing... 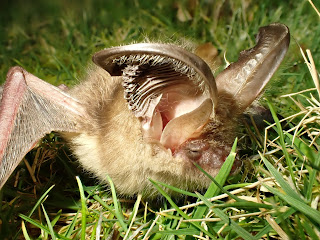 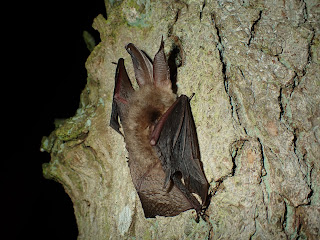 After a brief rest with a cuppa were did a round of the traps. As expected, the MVs on the rides were attracting the most moths but not necessarily the most variety... under the canopy of the trees, our homemade LED traps had a great range of species including these:

There were two stand out moths on the night; the first was a nice surprise but one we'd caught at this location last year and that was a Dotted Chestnut; a moth that seems to be on the increase and spreading quickly.

As wonderful as it was to catch a Dotted Chestnut,  the biggest surprise of the night wasn't a particularly rare moth but one we would never have expected to come to light: a stunning Orange Underwing,  a day-flying moth!


So a couple of cracking moths on a great night it in the woods.


Posted by Waveney Valley Moths at 15:52