A Spot of Birding

Yesterday morning I was lounging around with nothing to do but wait for builders to arrive when I got a message from Howard about a couple of Eastern Yellow Wagtails which had been seen at Dingle Marshes near Dunwich.  Having not gone to see the long-staying individual last year,  I had planned a trip for these birds but it would not be on this sunny Saturday morning.  Moments later a text from Peter brought news of another bird in the same location; a  Greater Yellowlegs. Now this was not what I wanted to hear... I absolutely HAD to stay in to wait for the builders, didn't I? Well no, I could've left but my conscience wouldn't allow it. There was a lot of stuff to clear out of the way and I couldn't keep putting it off.

The four of us set to and cleared the garden ready for the builders but rather frustratingly they still didn't arrive...

With news of the Greater Yellowlegs showing well,  together with Short-eared Owls,  Merlin, Snow Bunting and White-fronted Geese all putting in appearances,  the day continued to frustrate and disappoint, especially with news that the Yellowlegs decided to leave the area at 2.05pm flying North without any further sightings.  Eventually the sun set and STILL NO BUILDERS!

With thoughts of what could've been I decided that I would make an early trip on Sunday morning to look for the Wagtails. At 6.30am I set off in damp conditions wondering if it was really worth the bother; a quick look at the forecast promised only a small chance of sunshine and a fair chance of showers.  I seemed to be setting myself up for disappointment!

I arrived at Dunwich Beach at 7am and had the place to myself. As I started the long trudge North towards the last-known location of the Wagtails, the sun started to break through just above the horizon

I continued slowly heading up coast in the socially distant company of a chap who had also missed out on the chance of the Yellowlegs the day before due to work.  Looking back the way we had come it appeared that we had this stretch of coastline all to ourselves and in the gloomy light over the marshes I picked up a Kingfisher and a Great White Egret while skeins of several hundred Barnacle Geese honked over our heads.
There was plenty of movement over the sea early on with several small flocks of geese and hundreds of gulls. Teal and Wigeon were flying just off the beach. 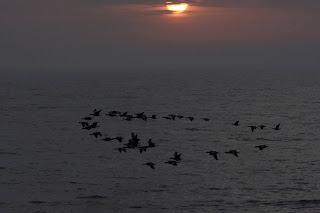 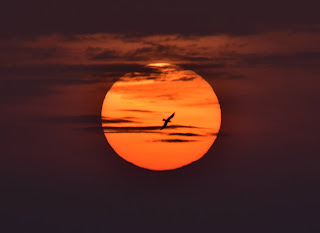 Suddenly it was like someone turned on the lights as the sun rose high enough to illuminate the marshes and birds began to rise from their slumber. Godwits stretched whilst large herons of grey and white varieties floated lazily over the reedbeds.
Approximately 2km north of the carpark the chap I was with (we never exchanged names!) pointed out a distant wader which didn't seem to have fully awoken. We exchanged ideas about what we thought it was and in spite of us both being resigned to the fact it had long since departed, came to the conclusion that it had to be the Greater Yellowlegs! We watched it as it first began to feed and then, after regurgitating an uncomfortably large pellet went back to sleep!  I put the news on the Suffolk WhatsApp group and almost immediately, the small group of birders about half a kilometre north of us, presumably watching the Eastern Yellow Wagtails,  dispersed and headed towards us.
I exchanged a few pleasantries but left them to watch the Yellowlegs and continued northward to search for the 2 Wagtails.
Again,  I had most of the beach to myself as I mooched along the edge of the marshes watching Linnets, Skylarks and a couple of Pipit species going about their business however the only Wagtail I found was a smart Pied.  Just then a call caught my attention and it was a Wagtail. Unfortunately,  even though I couldn't see it being anything other than one of the Eastern Yellow Wagtails, it dropped out of sight over one of the shingle ridges.  I slowly edged forwards hoping to look along the back of the ridge hoping not to spook the bird.  I didn't spook it, on the contrary,  this juvenile bird was completely indifferent to my presence and gradually picked its way towards me delicately flitting over the stones and mud, in and out of the reeds catching midges and crawling insects.  A few times it brazenly stood out in the open less than 6 metres from me!

The bird gradually worked its easy out of sight to the far right end of the pool just as two more birds dropped in and immediately started squabbling. An adult and a different juvenile Eastern Yellow Wagtail then spent about ten minutes entering myself and aforementioned unnamed man.
The adult Wagtail soon chased off the youngster and hung about for some lovely views for several minutes.

With a long yomp back along the beach still ahead of me,  I decided to rejoin the ever increasing number of socially distanced birders enjoying the confiding Greater Yellowlegs in glorious mid-morning sunshine. It had been closer during my absence but watching it feed for a while alongside Redshanks seemed the right thing to do before heading back to the car.

Driving back along the Dunwich Road with a rather large grin on my face,  I realised the time was getting close to 11am on this Remembrance Sunday so I pulled into a car park and listened to the coverage of the ceremony at the Cenotaph whilst looking over the fields along the Westleton Road. About 6000 Starlings murmurated in the distance and a Buzzard lazily glided low over the fields with the accompanying soundtrack of Big Ben's chimes,  a 21 gun salute and the melancholic Last Post...

Posted by Waveney Valley Moths at 14:54